According to retired Air Force Major George Filer, an intelligence officer at McGuire Air Force Base in Burlington County, New Jersey during the 1970s, aliens from outer space are real, and the government is covering it up. (But we already knew that, didn’t we?)

Filer recently told the Burlington County Times that at some time after midnight on January 18, 1978 an Army military police officer at the Fort Dix area of the Joint Base McGuire–Dix–Lakehurst, chased after a low-flying aircraft and came into contact with a creature about four feet tall with dull-colored skin, long arms, large head and big black eyes known among the military as a “gray.”

He says he knows this because he was there, in 1978, when it happened.

Filer says the Army officer shot the creature five times before it “either climbed over or crawled under the fence that separated the two bases [Dix and McGuire].”

An Air Force security guard and a New Jersey state police officer later found the creature dead during a search of the McGuire property. 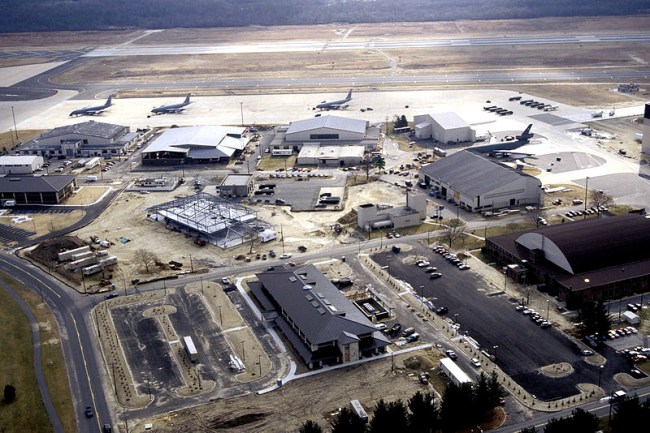 When Filer showed up for work at 4 a.m. that day (his job was to brief the generals every morning), he and a sergeant had a conversation about what had occurred.

“He said, ‘An alien was shot and is dead on the runway.’ I said ‘You mean an alien, like a Mexican alien?’ He said, ‘No, no, this thing’s from, you know, outer space. They want you to brief General (Thomas) Sadler.’ I said, ‘It’s a joke, right?’ Sadler doesn’t have much of a sense of humor.”

Filer says he contacted both the wing command post and security police and they each confirmed to him that there was “some sort of alien being, dead, out on the runway.”

He claims a C-141 later flew in to McGuire from Wright-Patterson Air Force Base in Ohio, loaded up the creature and took off. Then after writing up his report for General Sadler regarding the creature, a senior officer told him to stand down.

Filer, a member of the Disclosure Project – a panel of military experts, astronauts, and scientists that are pushing the U.S. government to release everything it has on UFOs to the public – chronicles this story and more encounters with UFOs during his days as a U.S. Air Force pilot in the book Strange Craft: The True Story of An Air Force Intelligence Officer’s Life with UFOs.

During secret debriefings at U.S. bases, pilots and air crew told their commanders of seeing strange lights at night and in the daylight, groups of saucer- or cigar-shaped craft that easily paced them just a few yards off their plane’s wingtip. Award-winning investigative reporter John Guerra spent four years interviewing Filer, a decorated intelligence officer. From objects in the skies over Cold War Europe to a UFO overflight during the Cuban Missile Crisis to strange lights over the DMZ during the Tet Offensive, Filer leaves nothing out about his Air Force UFO encounters, providing Guerra all the amazing details of his six decades investigating extraterrestrials and their craft. Sumerian And Biblical Texts Claim People Lived For 1000 Years Before Great Flood: Is It True?