Mr. Allen stated, “On July 20, 2010 at 3:18:07 AM in NW Washington DC, approximately one mile south east of the White House, I imaged a slow moving hyperdimensional Extraterrestrial space craft pulse through the sky, and then (observed the U̳F̳O̳) fired a ray of light or directed energy beam in the vicinity of the White House.

​Mr. Allen, who grew up on U.S. military bases and now resides in Washington, DC, has stated that at age five he was visited by a group of “four to five grey e̳x̳t̳r̳a̳t̳e̳r̳r̳e̳s̳t̳r̳i̳a̳l̳s in silver spacesuits” who implanted him with a device. 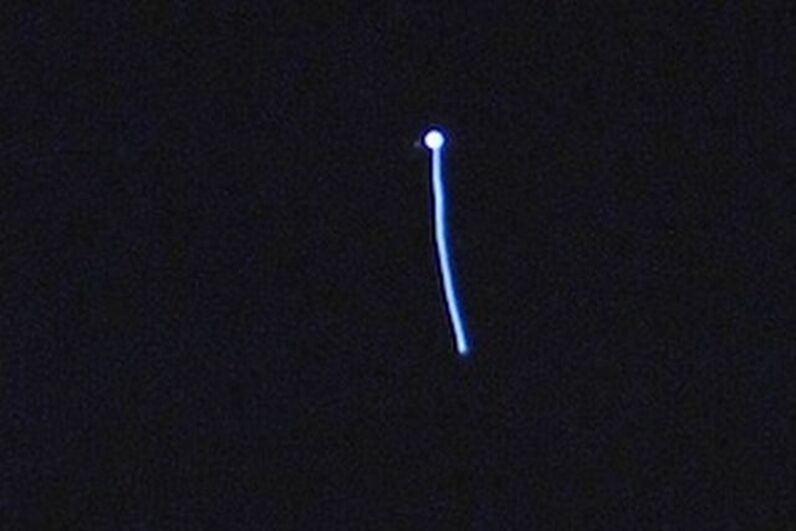 That implant device went undetected during all the years of his military and White House service, and now signals him to go to specific locations in Washington, DC where he is instructed to photograph e̳x̳t̳r̳a̳t̳e̳r̳r̳e̳s̳t̳r̳i̳a̳l̳ craft and personnel that enter P-56A restricted Capitol Hill airspace through hyperdimensional Star gates at extremely high speeds.

Mr. Allen believes that his photographs, which are forensic in quality, document that the same intelligent hyperdimensional c̳i̳v̳i̳l̳i̳z̳a̳t̳i̳o̳n̳ was behind the July 16, 1952 and the July 16, 2002 flyovers of the U.S. Capitol.

It is not unreasonable to ascribe intentionality to the hyperdimensional U̳F̳O̳ that performed a dimensional shift into a self-generated Star gate phenomenon and entered Washington DC airspace one mile south east of the White House, emitting a ray of light or directed energy beam.

And last year, July 16, 2014, a camera live stream of US Capitol registered a beam of light coming from or directed to the top of the building.

The utter transparency and public proximity of Extraterrestrial spacecraft to the White House, the seat of U.S. Executive power, is prima facie evidence that the “ET Disclosure” movement is actually a scripted meme, directed by the Rockefeller interests and U.S. clandestine services for New World Order world government globalist power objectives.

Any ET Disclosure that occurs under the auspices of a United States government administration that is part of the Rockefeller CIA time-travel pre-identified US Presidencies as identified by whistleblower Andrew D. Basiago (So far, Bush Sr.; Clinton I; Bush II; Obama) is actually part of a meme scheme to preserve or enhance global and cosmic power by the Jesuit, Rockefeller and Trilateralists group.

That is, the Rockefeller-CIA-Trilateralist interests want to control the information that is being “disclosed” so as to maximize control over the human population so they can continue as an elite to exploit them.

Whatever the real truth is actually out there, rest assured the Powers That Shouldn\’t Be will do whatever it takes to make sure we are never allowed to learn it.

Instead we\’ll get drip-fed a bunch of government lies, illusions, distortions, and half-truths as pre-programming for a sinister agenda.

While the probability of life on other planets is surely compelling, we\’re not going to find the truth through gatekeepers in establishment positions of power, be that in government, Hollywood, or via elitist billionaires who have documented ulterior motives.

A secret government has set up shop, is deeply rooted, and there\’s no getting to the truth without going through them first.

Until we deal with the reality of the breakaway c̳i̳v̳i̳l̳i̳z̳a̳t̳i̳o̳n̳ that\’s been keeping mankind at large in the dark (sometimes literally) for centuries, we can hardly process the significance of contact from beyond.

Extraterrestrial life is being held and will be dealt as a card that requires ascension to world government and submission to a higher earthly authority.

So compelling indeed is the opportunity to use a̳l̳i̳e̳n̳s as a pretext for total control, that leader after leader have hinted at its unifying power over humanity.

In the background, the possibly of a Project Blue Beam scenario has been prepared should the time come for the last card to be dealt to a humanity unwilling to march dutifully along under the banner of a one world government New World Order.