In recent observations made of  the Occator crater on  the planet Ceres by the Dawn NASA spacecraft, a rather interesting discovery has been made. 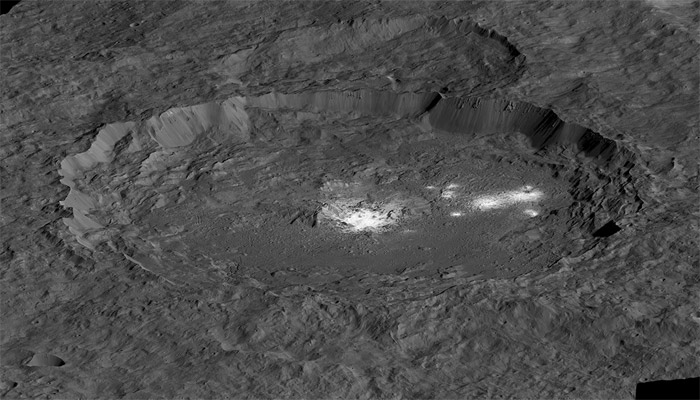 From  March 2015 to October 2018 , specialists conducted an exhaustive study of the Dwarf Planet, as it is also known. The analyzes ended when the Dawn space probe, responsible for transmitting the information, ran out of fuel.

One of the aspects that attracted the attention of Ceres, is the series of  bright points  along its 92 kilometers wide.

The experts who worked in the Dawn team concluded that this glow is due to the  salts that remain when water evaporates  from  space .

The analysis also found that there is a possibility that the water began as  underground ice , which must have melted from the  intense heat  produced by Occator when it impacted the planet  20 million years ago .

Once the ice melted, a part of the liquid must have come out through fissures or cracks to the surface and have evaporated, according to the report given by  space.com .

All this process occurred just about  4 million years ago,  which is the age that the youngest deposits in the Occator soil are calculated by their appearance.

However, it is that 16-year span of time that has upset the researchers, as stated.

For the co – author of the study,  Julie Castillo-Rogez , who is a planetary scientist at the Jet Propulsion Laboratory (JPL) of  NASA  in Pasadena, California: ” It is difficult to maintain the liquid  so close  to the surface.”

Even earlier studies calculated that “cryomagm” could have been in a liquid state for 400,000 years in the subsoil. Very close to the Occator crater of Ceres.

Obviously, the latest research results are only a partial answer.

The work has been carried out jointly between Castillo-Rogez and associate professor at the Jackson School of Geosciences at the University of Texas,  Marc Hesse .

He proposes that the subsurface near Occator has insulators that could sustain the liquid “cryomagm” for an approximate time of about 10 million years.

A finding that shows how little we know about our Solar System and the stellar bodies that surround it. Is it possible that these planets have been fit for life at some point in history? Or, on the contrary, will it serve for future space colonies?